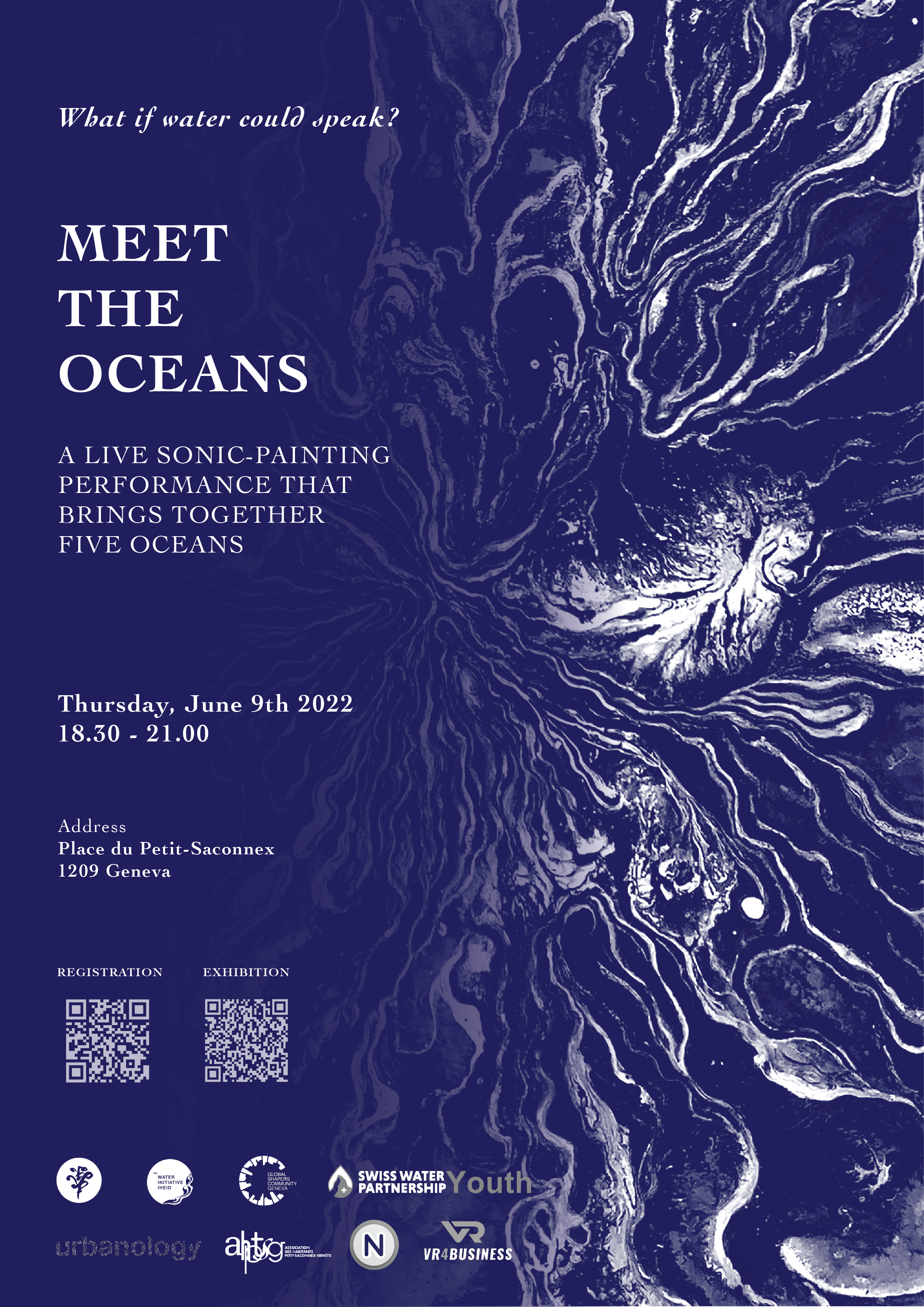 What if oceans could talk ? "Meet the Oceans" is a live performance that brings together the five oceans to the General Assembly of the "United Oceans (UO)” in Geneva. The artistic conversation invites the audience to listen to the oceans speaking about their experiences due to human activities and their hope for a shared ecological future.

The performance is based on Watersation, written by Aditi Joshi. The event was co-produced by QinTheory Studio, Global Shapers Geneva Hub, Water Initiative IHEID, and Urbanology, concurrently with a VR exhibition created in collaboration with Norweez, the first under water metaverse supporting ocean-restoration initiatives.

Nature, which is muted in our human stories, always stays in the background of important negotiations concerning ecological justice and climate change. Our live performance series (on glaciers & oceans) aims to challenge the passive role of “nature” in political, scientific conversations, whose existence is to be taken and transformed into useful resources, and to transform that by giving the active voice to nature through embodied story-telling. Following our first experience with "Meet the Glaciers" (organised on March 8, 2022), the conversation of "Meet the Ocean" brings together the five oceans of the planet –– the Atlantic Ocean, Arctic Ocean, Indian Ocean, Pacific Ocean, and the Southern Ocean –– each represented by a passionate water professional, sharing the concerns, emotions, and wisdom which an ocean carries in today’s world.

About 71 percent of the Earth’s surface is water-covered, and the oceans hold about 96.5 percent of all Earth’s water. It breeds the oldest forms of life on the planet and the greatest mysteries to humans. Being such a large and crucial component of our environment, oceans are not given enough attention. Despite several water bodies require our attention now more than ever, the oceans are what most of them culminate into. The live performance integrates story-telling, experiential group process, live experimentation, and aesthetic-sonic rendering to generate authentic affects and meanings in the public viewers. The circular format of the performance simulates the “fireplace” which holds intimate conversations about urgent issues that threaten our existence, encouraging the audience to surrender themselves to the senses and to fully experience the emotions that come through the collective releasing.

Based in Switzerland, “Meeting of Waters” is a local community at the intersection of Art, Science, and Policy. Our common vision is to shape Water Consciousness worldwide by sensitising the public about water-related issues. Water is the root of all lives and the broken water system connects to all the underlying symptoms of the climatic and humanitarian crises. Nearly in every culture, water is considered a sacred, life-giving element and provides a spiritual identification to the civilisation. As a diverse community of researchers, activists, volunteers, and citizens from all around the world, our professional work all touches upon water, and our intuitive connection with water brought us together to find the missing piece of emotion –– bring it back and integrate it into our different walks of life. "Meet the Oceans" is presented by the following performers: